Tips for Teens – Buying vs Streaming 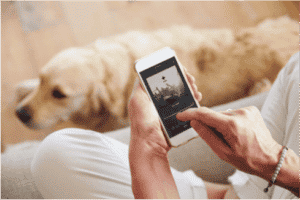 You might want to sit down for this one. Your Netflix and/or Spotify account is costing more than you think.

Most of you have probably heard of Netflix or Spotify at some point in time. For Netflix, you pay anywhere from $7.99 to $11.99 a month and for Spotify you pay $4.99 (for students) to $9.99 a month. Both of these services sound like they’re a great deal since they let you stream on demand any song or movie you can think of.

Almost any song or movie you can think of.

You see, these services can only stream content they have a right to stream. Remember when Taylor Swift released 1989 and you couldn’t hear Blank Space on Spotify? This is because she didn’t want her music being streamed on Spotify, which is something all music artists and production companies have the right to decide. You might have also noticed by now that The Hunger Games is missing from the Netflix catalog. This is because Netflix did not renew their contract to stream STARZ content which resulted in Netflix being unable to stream The Hunger Games and Transformers: Age of Extinction, to name a couple titles. This is the first flaw streaming services have; they can lose or be denied the right to stream content. Let’s say you’re watching Grey’s Anatomy on Netflix and one day it’s gone and there is nothing you can do about it. Sounds pretty extreme right? Well it does happen. Not often, but it does happen.

The second and biggest flaw streaming services have is the cost. Like I said above, for Netflix, you pay anywhere from $7.99 to $11.99 a month and for Spotify you pay $4.99 (for students) to $9.99 a month. EVERY MONTH. It doesn’t seem like a lot of money upfront, but in the long run, it adds up. Let me put this into perspective. In the past month, I have listened to the following albums: Dopamine by BØRNS, This is Acting and 1000 Forms of Fear by Sia; and to the following singles: New Americana by Halsey, Dreams by Brandi Carlile, and Rocketeer by Far East Movement. If I were to purchase everything I’ve heard in the past month on Google Play (my digital media store of choice), it would cost me $31.84 dollars or about 3 months and 6 days of a Spotify Premium ($9.99) subscription. You may be wondering why this is a big deal. I would only have to pay $31.84 dollars and the music would be mine forever, with no ads and the ability to download it onto my phone or as an MP3 file. With Spotify I would pay $9.99 every single month for the ability to play the music with no ads and the ability to download it only onto my phone. Now, let’s say that I only listen to these songs for a year (which is very probable since I love them). I could pay $31.84 on Google Play OR $119.88 on Spotify, as illustrated below: 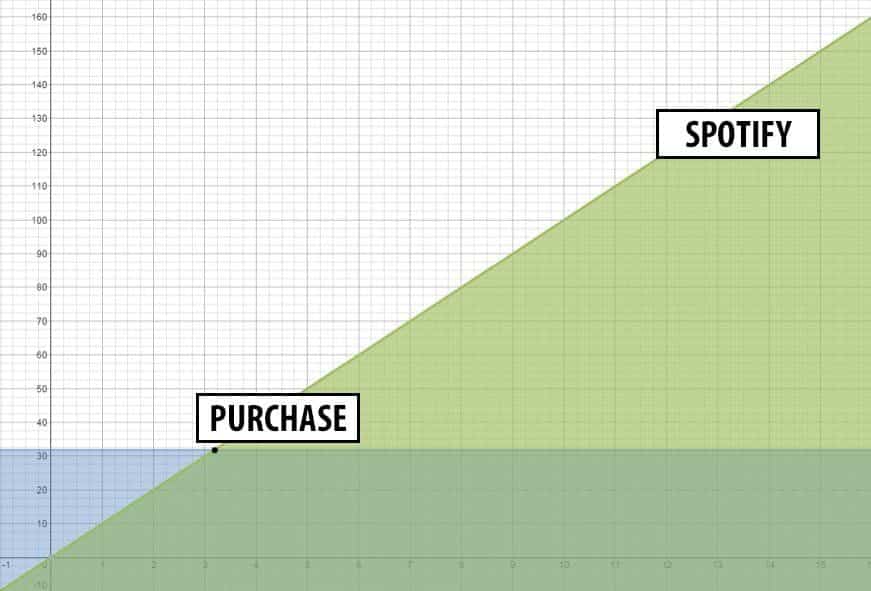 The green symbolizes the cost of a Spotify Premium account. As you can see, Spotify gets more and more expensive every month past the breakeven point. The breakeven point, shown in blue, is how much it would cost to own the music I would have listened to on Spotify this year.

The worst thing of all is that when you stop paying for your Spotify account, you lose access to the music on Spotify, thereafter.

Netflix is also guilty of this. I calculated how much my family and I have spent on my digital movies and TV library for the past 6 years, which totaled $562.61. Using the same concept as above, I present you the following graph: 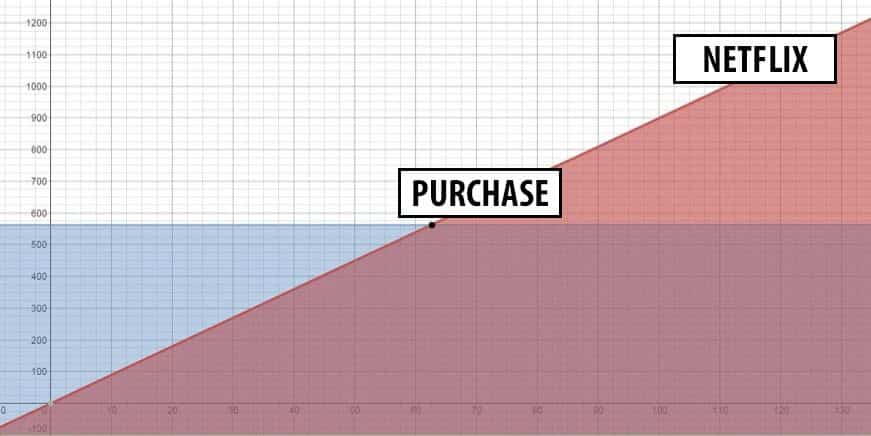 The red symbolizes the cost of a Netflix account at $8.99 per month. The breakeven point, shown in blue, is how much we have spent on our digital library. One thing to note is that the breakeven point is after 62 months, which is about 5 years, making Netflix at least a little more cost effective than a Spotify account.

I encourage you to figure out how much it would cost to buy all the music you listen to and/or the movies and shows you view for the year, and compare it to your streaming costs. You will probably find that you’re paying more than you need to by sticking to streaming services.