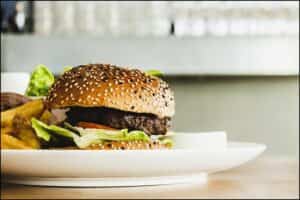 I’m afraid to eat meat. Specifically, I’m afraid to eat meat substitutes such as Impossible Burgers and Beyond Burgers. To the surprise of my mom, I eat more vegetables than ever. However, I’m not sure what kinds of additives, if any, are included in these meat substitutes. Maybe I have nothing to worry about, but a few years ago not too many people were worried about vaping.

There’s another reason to be concerned about meat substitutes. The stock market had to halt trading of Beyond Meat Inc. due to extreme volatility. On one day in January, shares of Beyond jumped 12.5% and then rose an additional 40% four trading days later.

Why did this happen? Beyond Meat’s rival Impossible Foods Inc. announced it would not be able to produce enough burgers to partner with the crown prince of meat patties, McDonald’s, which said it was expanding its test run of Beyond Meat in Canada. Traders immediately got on the Beyond Meat bandwagon, and before they could say, “Hold the pickle; hold the lettuce,” Beyond’s share price got a significant shot in the arm.

It doesn’t seem to matter that Beyond has posted significant losses for the past three years. But those financial results motivate a different type of investor – the short sellers. Those investors bet against the company by borrowing shares and then selling them. This would be like betting against your own team. If an athlete did that, they would be banned for life. But on Wall Street, the focal point remains how much money is made, not how it’s made.

As the stock price rose, short sellers have to buy more shares to cover their positions. Generally speaking, the more shares are being purchased, the higher the price increases. If the investor’s brokerage account balances falls below the minimum balance and they cannot cover the shortage (this is referred to as a margin call), the account is closed, and the broker may “repossess” the shares and liquidate them. The amount the investor can borrow is based on the brokerage firm’s lending policy, very much like a credit union.

Short selling is usually a one-day investment and reserved for those with deep pockets and a stomach for losing potentially large amounts of money. We saw day traders come and go trying to time the market and losing their rent money. Short sellers lost $500 million on Beyond during that one day in January. I’m so risk averse I would eat a meat substitute before short selling a stock.

Ever since it went public last May, Beyond Meat has been a volatile stock. Shares jumped 163% on the first day of trading. They hope to expand into mainland China, the world’s largest consumer. Whether Beyond can transform into a viable company with a positive bottom line is still an open question. Its continued volatility will keep them off my retirement investment list for now. In the meantime, I’ll have my turkey burgers my way (apologies to Burger King).